Growing up, I was a shy kid. I didn’t want to be singled out, I was afraid to talk to strangers and stepping outside my comfort zone was a no. The world saw a shy girl while at home I was full of songs and silliness. When I was eight years old, my song couldn’t be contained any longer. I don’t know how it happened, but I found myself singing the national anthem for the local hockey team. I was terrified.

I walked out onto the slick ice, looked at the crowd until I finally found the American flag. I didn’t take my eyes off of the flag, I was fixed on not messing up. If I messed up maybe everyone would hate me, I would be a disgrace to my country and they would deport me. Okay, maybe not. But I was afraid — sheer embarrassment was on the line.

Before I knew it I had finished the anthem and people cheered. I was relieved. It’s crazy to realize this was the start to many, many things. Within ten years I have been blessed to do music in the most amazing places with the most amazing people.

Yet, at eight years old I was placed in a hockey arena to sing a song. That song leads to more songs, and those songs lead to new people, and those people lead to new places, and in these places, I grew into the person I was called to be.

“If you do what the Lord wants, He will make certain each step you take is sure. The Lord will hold your hand, and if you stumble, you still won’t fall.” (Hebrews 12)

Don’t get discouraged. When you step outside your comfort zone (even when it doesn’t feel like it) you are growing. When we allow it, God shapes and whittles us into the people we were called to be. The world saw me as a shy girl, but God knew I was capable of standing in front of crowds and having a voice.

I have a lot of growing to do; there are many times where I’m afraid to step out and say something or take action. But my prayer is to be brave and overcome that fear because that kind of fear is not from God. That fear is only the enemy trying to hold me back.

I believe that every single one of us has a calling that God has set on our hearts. And I want to encourage you to step outside your comfort zone, reach out and grab it by the tail! Be brave, follow Jesus. Reach out to that person you see on the street, stand up for the kid being picked on, sing out your praises, dance in the street, try that new thing you have always wanted to try! Whatever it is that you have been afraid to do, conquer it.

As we are liberated from our own fears, our presence automatically liberates others. Remember, love ALWAYS overcomes fear. You never know where a single step might lead.

Make Him a Monogamy Junkie by Gloria Lee 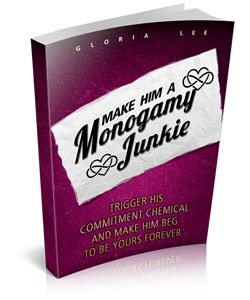